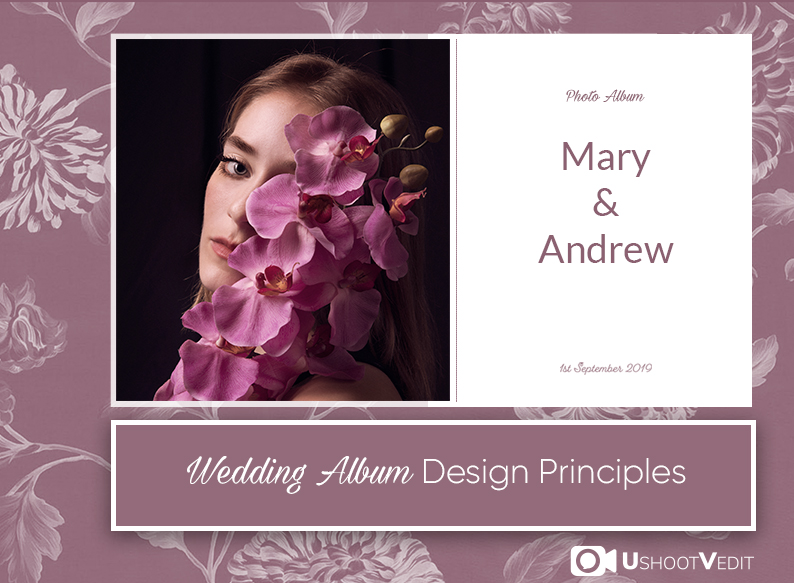 If you ever look at a very well designed wedding album or a magazine or good storybook, you will notice that they all have one thing common. They are all seamless i.e. they are designed in a way that the viewer does not even notice that he/she is reading or viewing something. They get so engrossed in the album that the viewer just doesn't notice it. In other words, such fantastically designed wedding albums are purposefully designed in a way to keep the viewer engaged i.e. the viewer’s eye should simply flow from left to right, seamlessly. Album layouts use the same design principles, as the photographers use to lead the eye and balance the image or purposely throw the image off balance. Album design principles are a very essential part of the wedding album design process.

Here are some Wedding Album Design Principles that should be kept in mind, when designing the wedding album. Keep in mind the three F’s i.e. Form Follow Function in wedding album design. Form is simply what the album looks like and function is how it will work.

Use of Space is extremely important in Wedding Album Design. A photographer must be able to look at an image and tell whether the shot requires more space in order to bring it out. In other words, the white space is the negative space and should talk about the positive space i.e. the image. All that means is that the album designer is drawing the attention of the viewer to the image.

By default, human beings are designed to read from left to right. Wedding Album Designers through image placement draw attention of the viewer through the continuous movement of a focal point aka certain elements in the photo, along the surface of the album. They create optical lines, either through their images or via image placement on their album spread.

Implied Texture is the way the overall design is perceived i.e. the look and feel of it, rather than the actual Tactile Texture. The look and feel of the album design can create warm and fuzzy feelings. The implied texture can trigger emotions and overwhelm the viewer.

The use of images on the spread in a way that they appear to be related to each other is very important. For instance, if the album designer places an image of the bride and groom kissing next to a group shot of the bride with the groom’s family on the same spread, even though that was the actual sequence of the events, the album design is not going to cut it. Images on the left of album spread should be related to the images on the right side of the album spread. They should be in harmony with each other.